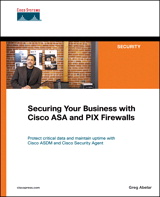 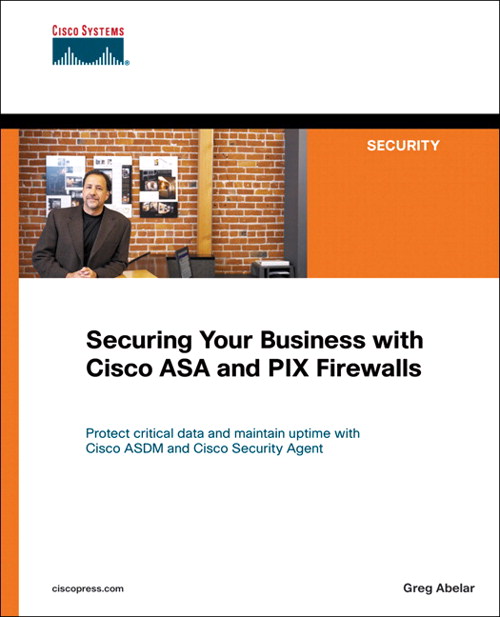 Securing Your Business with Cisco ASA and PIX Firewalls

This PDF will be accessible from your Account page after purchase and requires the free Adobe® Reader® software to read it.

The eBook requires no passwords or activation to read. We customize your eBook by discreetly watermarking it with your name, making it uniquely yours.

Many people view security as a “black-box-voodoo” technology that is very sophisticated and intimidating. While that might have been true a few years ago, vendors have been successful in reducing the complexity and bringing security to a point where almost anyone with a good understanding of technology can deploy network security.

Securing Your Business with Cisco ASA and PIX Firewalls is an extension of the work to simplify security deployment. This easy-to-use guide helps you craft and deploy a defense-in-depth solution featuring the newly released Cisco® ASA and PIX® version 7 as well as Cisco Security Agent host intrusion prevention software. The book simplifies configuration and management of these powerful security devices by discussing how to use Cisco Adaptive Security Device Manager (ASDM), which provides security management and monitoring services through an intuitive GUI with integrated online help and intelligent wizards to simplify setup and ongoing management. In addition, informative, real-time, and historical reports provide critical insight into usage trends, performance baselines, and security events. Complete with real-world security design and implementation advice, this book contains everything you need to know to deploy the latest security technology in your network.

Securing Your Business with Cisco ASA and PIX Firewalls

provides you with complete step-by-step processes for using Cisco ASDM in conjunction with Cisco Security Agent to ensure that your security posture is strong enough to stand up against any network or host attack whether sourced from the Internet or from inside your own network.

"Firewalls are a critical part of any integrated network security strategy, and books such as this will help raise awareness of both the threats inherent in today’s open, heterogeneous internetworking environments and the solutions that can be applied to make the Internet a safer place."

Part I   Network Security and the ASA/PIX Security Appliance

Assessing Your Vulnerability to Network Attacks

Anatomy of a Computer Attack

Protecting Yourself and Your Business

Chapter 3   Getting Started with the ASA/PIX Security Appliance

Understanding the Elements of Your Network

Connecting to the ASA/PIX Security Appliance with ASDM

Review of Your Current Network Topology

Designing the Network Topology to Include Web and Mail Services

Logical Placement of the Servers

Defining Inside and Outside Server Addresses

Use the ASDM Startup Wizard to Deploy Web and Mail Services

Connect the New Servers to the ASA/PIX Security Appliance

The Purpose of Authentication

Authentication for Inbound and Outbound Services

What Is Intrusion Prevention?

Why Use IPS and IP Audit?

What Are the ASA/PIX IPS and IP Audit Signatures?

Deploying Intrusion Prevention on the ASA/PIX

Why Use Host Intrusion Prevention

Anatomy of a Host or Server Attack

Using the VPN Client with NAT