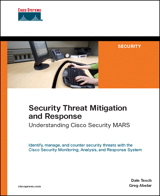 This PDF will be accessible from your Account page after purchase and requires the free Adobe® Reader® software to read it.

The eBook requires no passwords or activation to read. We customize your eBook by discreetly watermarking it with your name, making it uniquely yours.

While it is commonly understood that deploying network security devices is critical to the well-being of an organization’s systems and data, all too often companies assume that simply having these devices is enough to maintain the integrity of network resources. To really provide effective protection for their networks, organizations need to take the next step by closely examining network infrastructure, host, application, and security events to determine if an attack has exploited devices on their networks.

Security Threat Mitigation and Response helps you understand this powerful new security paradigm that reduces your security risks and helps you comply with new data privacy standards. This book clearly presents the advantages of moving from a security reporting system to an all-inclusive security and network threat recognition and mitigation system. You will learn how Cisco Security MARS works, what the potential return on investment is for deploying Cisco Security MARS, and how to set up and configure Cisco Security MARS in your network.

“Dealing with gigantic amounts of disparate data is the next big challenge in computer security; if you’re a Cisco Security MARS user, this book is what you’ve been looking for.”

Dale Tesch is a product sales specialist for the Cisco Security MARS product line for the Cisco Systems® United States AT Security team. Dale came to Cisco Systems through the acquisition of Protego Networks in February 2005. Since then, he has had the primary responsibilities of training the Cisco sales and engineering team on SIM systems and Cisco Security MARS and for providing advanced sales support to Cisco customers.

Greg Abelar has been an employee of Cisco Systems since December 1996. He was an original member of the Cisco Technical Assistance Security team, helping to hire and train many of the team’s engineers. He has held various positions in both the Security Architecture and Security Technical Marketing Engineering teams at Cisco.

Part I          The Security Threat Identification and Response Challenge

Meeting the Needs of Industry Regulations

Chapter 2   Role of CS-MARS in Your Network

The Self-Defending Network and the Expanding Role of CS-MARS

CS-MARS: Filling the Gaps in the Self-Defending Network

CS-MARS as an STM Solution

Reasons for an STM

Insight, Integration, and Control of Your Network

Impact of Attacks and Probability of Reoccurrence

Using CS-MARS to Ensure ROI and Protect Your Assets

Cost of Recovery Without CS-MARS

Technical Introduction to the CS-MARS Appliance

Deploying CS-MARS in Your Network

Types of Devices and the Information They Provide

The Difference Between Reporting and Mitigation Devices

Configuring Devices to Communicate with CS-MARS

Enabling IDS and IPS in a CS-MARS Environment

The Two Types of Rules

Using the Query Tool to Create a Rule

Modifying the Communications to the SmartDashboard/CMA